John McDonnell proposed People’s Quantitative Easing shortly after Jeremy Corbyn was made leader of the Labour Party. It might have been wiser at the time to promise nothing controversial because the party establishment were in a state of shock at Corbyn’s win and were hostile to radical economic policies.

McDonnell has since gone quiet on the idea. However, the concept appears to be gaining traction as Adair Turner and Martin Wolf have each recently advocated “helicopter drops” for monetary policy, as an aide to the sluggish world economy. The helicopter drop is an idea of Milton Friedman whereby the central bank would print off cash and give it directly to the general population.

McDonnell’s idea is to use money created through Quantitative Easing to invest in infrastructure rather than buying government bonds. The latter has had the effect of boosting the stock market without boosting capital investment by the listed companies. In fact, the low interest environment has often resulted in companies borrowing money to buy back their own shares rather than investing in expansion. In America, Apple has issued bonds to pay dividends to share holders, in order to avoid bringing home their foreign earnings. As long as it stays abroad they don’t have to pay tax. This wasn’t the intention of the policy. END_OF_DOCUMENT_TOKEN_TO_BE_REPLACED

Imagine yourself as a Muslim child growing up in the east end of London. Your immigrant parents are hard working and your home is warm. Everything in your life is normal and safe except for one strange thing. Each day your dad tells you that the western world is conspiring against Islam. That America and Britain are attempting to destroy your religion, your community, your identity. He then tells you that Islam is a peaceful religion.

Your childhood is happy. You do well at school. By the time you reach your teens, you are expected to go to university and achieve far more than your parents ever could. Again, each day, your dad tells you that the west wants to destroy Islam. It’s hurtful to know that the white people around you pretend to be friendly but in fact are duplicitous.

At the age of 15 you discover ISIS videos on the internet. They also tell you that the west wants to destroy Islam, but they tell you that your father is wrong. Islam knows how to fight back. You are inspired. You steal your brothers passport and credit card and you go to Syria with the intention of joining them. When your parents discover this, they are furious that the police did nothing to stop it. They blame the local mosque for radicalising their child. END_OF_DOCUMENT_TOKEN_TO_BE_REPLACED

Miliband should intervene in the sale of football rights

The buyers of the rights, BT and Sky are uninterested in football itself. They want to sell TV in order to bundle telephone and broadband into the sale.
Football is unique as an anchor for the sales of these other products. But because fans have no other way to enjoy their team, the prices gets forced up by the commerce of phone, internet, TV. This is not healthy competition that drives down prices for consumers, but unhealthy competition that drives them up.

It has got so bad that most people are forced to go to the pub to watch a game of football, because they can’t afford it at home. Dads used to bond with sons over this game, but not anymore. END_OF_DOCUMENT_TOKEN_TO_BE_REPLACED

The Cost of Civil Legal Aid

There is no better example of the times we live in, than the contrast in attitudes between Ursula Brannan and Hugh Strickland, witnesses before the Public Accounts Committee, on the effect of Legal Aid cuts.

One was armed with the facts, prepared with his arguments, and ready to justify his organisation. The other gave the impression that the MPs were lucky she had bothered to turn up.

One provided evidence based research to demonstrate why his organisation should continue to exist, while the other claimed to be acting on evidence, then realised that she wasn’t, when cross examined by Ms Hodge.

One runs an organisation whose future is so precarious that he doesn’t know whether it will be funded next year. The other is responsible for implementing Legal Aid cuts, and irritated that people weren’t a little more grateful for her hard work.

Hugh Strickland represented the Citizens Advice Bureau, and Ursula Brannan represented the Ministry of Justice. This spectacle makes up the first section of the BBC iPlayer clip (available until 6th Jan).
END_OF_DOCUMENT_TOKEN_TO_BE_REPLACED

The Conservatives Are Sacrificing Our Security Over Europe

During last week’s PMQs, David Cameron spoke of the failure to deport foreign criminals by accusing the opposition Labour Party of not being supportive of his efforts. Can I suggest that Labour can be supportive, if the government implements this simple policy to help protect the British people?

The Livescan fingerprint computer is the modern way of taking fingerprints, by placing the hand against a plate of glass, and allowing the computer to scan the prints. Within minutes Livescan produces the identity, photo and previous convictions of the subject.

Livescan is installed in most police stations in the UK and across the EU. This means that if someone is wanted as a paedophile, in Lithuania, then the computer has the power to immediately identify this person.

Unfortunately, the UK Livescan system is not connected to the EU, because the Tories don’t want integration between our criminal justice system and the rest of Europe. This means that foreign paedophiles and murderers can come to this country and evade detection. Even if they were arrested for some minor offence, we wouldn’t realise they were wanted if they gave a false name. The only way the officer could identify them, would be if he made a manual enquiry with Interpol, or happened to remember their face from a wanted poster from whichever country. END_OF_DOCUMENT_TOKEN_TO_BE_REPLACED

The investment community were expecting an ISA cap as the main feature of George Osborne’s budget, so they were as surprised as everyone else by the annuity policy. The budget was greeted with good cheer. Not only did the cap not happen, but the annual investment limit had been raised to a whopping £15k, without the Labour party seeming to notice. What a coup!

So let’s just see how the ISA breaks down. Let’s imagine a baby called Gideon junior comes into this world to a wealthy family, who immediately open a junior ISA, and deposit the maximum £4k per year until he is 16. He then gets an inheritance and he deposits the maximum £15k per year until he reaches the retirement age of 68. How much tax free wealth will he have by that time?

Financial advisers calculate future returns as being either 3%, 6%, or 9%, depending on how optimist the client is, of future returns, or interest rates. Using the 6% figure, Gideon junior would have £107,458 by the time he reaches 16. With £15k a year added, at 6% compound interest, by the time he is of retirement age of 68, his ISA would have grown to £7,811,662. END_OF_DOCUMENT_TOKEN_TO_BE_REPLACED

What do the British really think? 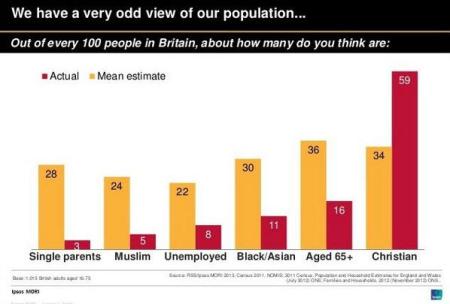 According to a study by Ipsos Mori, the British people seem to believe themselves to be surrounded by foreigners and scroungers. People perceive that there are five times as many Muslims as there are in reality. They believe that there are three times as many unemployed. They think that Christians are only a third of the population, when in fact they are almost double that figure. What to make of it? END_OF_DOCUMENT_TOKEN_TO_BE_REPLACED

The Tories have gotton so excited about the idea of decriminalising the BBC license fee, that it’s difficult to avoid the suspicion that they see this as an opportunity to do down the national broadcaster. Labour needs to have a response, or else the debate will be guided by those who wish to see television controlled by press barons and oligarchs.

Apparently 10% of cases before the magistrates’ courts are for evasion of the license fee. On the face of it this sounds extraordinary, but before we accept this figure on face value, we should first recognise that it came from the Magistrates Association, a body with a history empire building.

In recent years they have campaigned for fewer cases to be sent up to the crown court for sentencing, for themselves and not the police to give cautions to offenders, and for the abolition of fixed penalty notices, in order that they can have a monopoly over fines.
END_OF_DOCUMENT_TOKEN_TO_BE_REPLACED

The Dutch and French state railways are buying our rail franchises

The railway that passes our constituency office in Bethnal Green and Bow is owned by Abellio, the Dutch state railway company. Am I alone in thinking this is somewhat surreal?

We put these franchises out to tender because we wanted the private sector to provide their management know-how. It turns out that this company is not private sector but is the state sector of Holland. So rather than having the British state running British railways, we have the Dutch state running British railways, because they outbid the private rail companies, presumably because they have better management know-how. END_OF_DOCUMENT_TOKEN_TO_BE_REPLACED

What Ronnie Biggs tells us about the electorate

The life of Ronnie Biggs was notable for a story that people across the whole world were drawn to. The train robbery itself is well known to the reader, but the story of celebrity and rebellion is what makes him deserve an obituary today.

The story was not the one that policy makers would like; a man who fought the law and apparently won. But it was largely a lie, sold by Biggs to an awaiting media in order to escape his life of poverty in his third-world home, yet the need of people to own this story was truthful, and for us, it would be wise to consider its relevance.

In the film Goodfellows we were told an American mafia story in two halves. The first half concerned with the sheer joy of the gang being a law unto themselves. “Ever since I can remember, I always wanted to be a gangster”. The individuals who made up their own rules, while the state, with their corrupt police officers, was impotent. Yet, the 2nd half completely turns the story into the sheer horror that this apparent freedom from state control necessitates, opening with an horrific murder where the victim is stabbed repeatedly in the boot of a car until his life finally drains for him. The audience is shocked and sobered. The joy of being lawless is no longer apparent. The horror of the removal of the rule of state is apparent.

The media story of the Great Train Robbery with its huge haul was similarly turned by the horrific beating of the train driver, Jack Mills, mercilessly smashed across the head with an iron bar in an pointless and homicidal attack. The story progressed till the robbers were caught and the state was victorious. The matter would have ended there, if Biggs hadn’t escaped.
END_OF_DOCUMENT_TOKEN_TO_BE_REPLACED

McCurry's Weblog
Create a free website or blog at WordPress.com.