A volcano exploded, spreading chocking black smoke across the scene. Beams of light, from a cathode tube, darted through the billowing clouds. A TV screen for the British Isles. Three white middle-aged men. Only one could win. In the X-Factor election of 2010, the volcano was in British politics, and they named it Cleggamania. 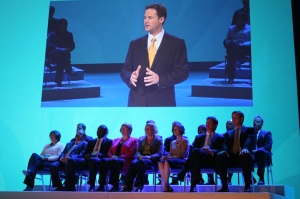 Ever since the science of polling had been born, no one had seen anything like it. The Liberal Democrats surged 50% following the first 90 minute screening of the X-Factor debates. Some said he was in the lead.

A new political star was born. But in the polling day that followed, they ended up with fewer seats than previous. What went wrong with Cleggamania?

In the Cowley Street HQ, the Lib Dem support staff were confused by the polls. Their canvas returns were not detecting the surge. What the pollsters were recording was not what was happening in the target seats.

In the same way that news was telling us of the volcanic ash heading our way from Iceland, all we could see was clear blue sky. Cleggamania was in the news, but didn’t seem real. In fact, it was happening, but everywhere that the Lib Dems were not campaigning.

As the smoke of the Cleggamania craze billowed across the country, the party didn’t know how to react. All their literature was designed to raise the party’s profile. Now they were now fighting a different campaign.

Meanwhile, their grass roots campaigners were dispersing. The X-Factor election had gone to their heads. Rather than descending on the target seats, they began to insist they could win their own constituencies.

They became thin on the ground in all the places that mattered, deluded that the magic of Cleggamania had finally given them the breakthrough. They believed that the Liberal Democrats were finally going to win.

In the same way that stars are born, under the altruistic gaze of Simon Cowell, only to fade before the day is out, it all ended in tears. Cleggamania was never real. It was just a TV show.

The Lib Dem HQ had poured their resources into 100 target seats, 30 of which they already held. But then came polling day. They ended the campaign with fewer seats than they started. Cleggamania was all an illusion. 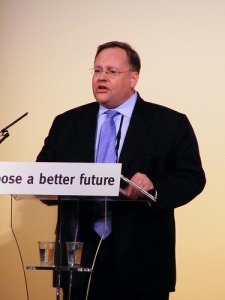 Photo by David Spencer
Rennardism is the name the Lib Dems gave their strategy. After Lord Rennard, the mastermind behind their “incremental targeting” strategy. One bloke takes a council seat. His mates come out and they take the neighbouring seat, then the next. Then one of them goes for the parliamentary prize. That’s the strategy.

Their campaigning was ruthless. Conduct a survey and discover an issue. A broken bus-stop, or a dilapidated park bench. Make it a campaign and promise the people everything tomorrow.

This was local campaigning at its most grass roots and where ever they were successful, they attracted the Lib Dems activists, who moved like a flock of starlings, cross country, to where ever the new target seat had been named.

But by 2008 the incremental strategy had stalled. The other parties were onto them and their tactics. It was getting tough out there.

The Lib Dems deposed their drunken leader and put in a posh bloke, then got rid of him and put in a young bloke, Clegg, but still they were falling in the polls. They were doing better when the drunk was in charge.

It’s difficult to imagine the disintegration of the Liberals; they’ve been around for so long. But that’s what it’s come to. They have failed in their objectives.

The failure is not their own fault. They existed as an alternative to the British Class system, so well represented by Labour and the Tories. But the class system has faded till it barely exists in modern British society.

Their party is made up of a peculiar mix. The left of the party is far to the left of Labour, yet the right is where two thirds of their seats exist. There is no coherence in the politics of this party and there’s little point in being the underdog, when all reasonable chance of ever succeeding has faded.

Nick Clegg has become so close to David Cameron you’d think they were brothers. Meanwhile, the Lib Dem candidates that failed to find a seat in the last election are co-operating with Labour policy review.

It looks as if they’re breaking apart. Nothing will happen while Labour continues to tread water. The Lib Dems are settled into a wait-and-see posture.

Forged in the white heat of opportunism, the cat-flap coalition has ended the year with more resilience than we ever expected. Back in the summer, we talked about how long it would last. We underestimated the lure. We thought that Cameron had put out a saucer of milk, but it turned out to be goose liver pâté. And we seem to have lost our cat.
Hollywood screenwriters say that the first act ends when the protagonist passes the point-of-no-return. In this film, that happened when Dave held back the pâté as the reward for Nick committing to £9,000 tuition fees. Nick licked his lips and agreed. Now he is stuck in this movie, and, for him, there is no return.
Well before the election, Cameron told us that he planned to screw the students. But we did not listen. Each time that he accused the Labour party of creating a generation of debt, it seemed like just a rhetorical attack on Labour. Now we know that he meant that the young would pay for the deficit. It was not rhetoric. It was policy.
When we see the Tories bat away the students’ anger, towards the sandal wearers, we do not just see the stupidity of Clegg, but also the trickiness of Cameron. This is what we are up against. Tricky Dave is not to be underestimated.
It is often said that Cameron is hated by his own party. However, they cannot help but admire him. After all, there is nothing a Tory admires more than a bastard. And he has certainly proved his mettle as that. He represents the Darwinian philosophy that they wish to impose on us all: the rights of the individual over the community, the strong destroying the weak, the winner taking all.
The word “coalition” makes this bastardised amalgamation of right-wing ideology and cat-flap Liberals sound nice. Reasonable even. Well done Greg Beales, Ed Miliband’s chief wonk, who told the shadow cabinet to stop using the word. It makes them too cuddly, he reckons.
But his alternative is to call them the “Conservative-led government”. But this does not capture the true character of this bread-roll thrower and his sandal-wearing apprentice, this “cat-flap coalition”.
It is surprising how hard a time the Tories get when they go on Question Time and blame the deficit on the previous government. Whether you like it or not, it was us who created the deficit. But when the Tories point this out, they get booed. Because people just do not like them. They are not sure why. But they do not.
With us it is different. They did not vote us out because they did not like us. They generally do like us. They voted us out because they saw that we were tired. In last year’s election, plenty of people said they would like Labour back after the Tories had sorted out the deficit. They wanted the Tories to come in, do the job, and then leave.
This is the problem of “nice-guy Dave”. Once people got to know him, they saw him for what he is. If he had presented himself as a good old fashioned “I just want to cut your taxes” Tory, then people would have had a grudging respect for him. As it is, he has always tried to be something that he is not: “nice-guy Dave”.
Let us bring down his paper thin, but deeply cherished, image. Let us call him “tricky Dave” every time we can. Let us help people to better understand what exactly it is that they do not like about him. Let us call him “tricky Dave”, again and again, until it sticks.
And let us call his alliance with “honest” Nick Clegg by its proper name too: the cat-flap coalition.
Dan McCurry blogs here

The chickens have really come home to roost for the British Labour Party. Look at that map that shows the whole of the south of England smothered with Tory Blue with only the tiny enclave of inner London bearing the Labour Red. This diagram demonstrates the confined extremity of the Labour core vote. It also shows how close we are to being wiped out. If you swapped the constituencies with pictures of Cowboys and Indians, it would be a diagram of Custer’s last stand. In all my time as a labour Party member, I have never known this party to be in a greater sense of denial. The housing policy, of the Nasty Coalition, aims to bring market forces to bear upon the inner cities, so as to push social housing out to the suburbs, or rather, to cleanse the affluent districts of poverty. This Kosovo-style social-cleansing is not just nasty but also politically sinister, in that it aims to disperse that Red; to disperse our people, our communities. They don’t care where they go, as long as they take their votes with them. And while all this is happening, we, the Labour Party, are slouching about discussing whether we should back AV. Shameful! Wanna know what the AV camp are saying privately? I’ll tell you. They’re saying that if we please the Lib Dems, they’ll agree to form a coalition with us at the next election and allow the Labour Party to form a government. That’s what they’re saying. Allow us? Just when the Lib Dems are on the ropes, these snivelling little runts in the Labour Party want to divide us in order that the “united” Lib Dems can give us permission to form a future government. These dividers want us to get out the begging bowl and go grovelling to a party who are so insignificant, that their HQ offices didn’t get smashed up by the students, only because no one knew where they were. There is one way and one way only of dealing with the coalition government; that is to vote it down, vote it down, vote it down. Let the Tories get divided over AV, while we are united in campaigning to bring about an imminent general election. Here’s the strategy to achieve it:- In the recent Kentish Town by-election the Lib Dems stopped campaigning on the estates because they couldn’t explain their Kosovo policy. Half of the Lib Dem MPs are in traditional Labour seats, half are in Tory seats. Nick Clegg is currently getting punished for his error over tuition fees, but the Kosovo policy is far more damaging because the student vote is scattered while the housing vote is concentrated. The Labour party needs to create a campaign concentrating on vulnerable Lib Dems; Simon Hughes in Southwark & Bermondsey is a good example. If we began voter ID campaigns in that constituency, I am convinced that the data we’d return would so frighten this MP that he would either vote against his party, or defect to Labour. Either way, we bring down the Nasty Coalition. So let’s not take the lead of Custer. While the Indians are circling and the arrows are pouring, we are not so foolish to fight a defensive battle, on their ground, and their terms. Now is not the time to offer gifts to the pitiful and struggling Liberal Democrats. Now is the time to come out fighting, on our ground, our terms and with our strategy. We all know how vulnerable the Nasty Coalition is, so let’s concentrate our fire and attack, attack, attack!